When you’ve earned Delta SkyMiles to fly any from Europe or Asia Delta’s partner airlinesBad news: For the second time in the last four months, Delta has greatly increased the number of miles you need for certain partner flights. Business Class seats could cost up to 160% more SkyMiles than last summer, while Economy and Premium Economy seats have also increased (although not quite as dramatically).

The closer you book to your departure date, the more SkyMiles you will pay on one of these partner airlines.

Here you can see the number of SkyMiles you need to fly a Delta Partner to each of these regions and the amount you will pay if you book less than 60 days before departure.

The number of SkyMiles required for a flight depends in part on whether the flight is operated by Delta or one of its partners. For its own flights, Delta bases the mileage price on the cash price, known as dynamic pricing. Award flights operated by Delta can range from 2,000 SkyMiles each way Basic economy …

… up to 465,000 SkyMiles for an international one-way flight to South Africa in Business Class. 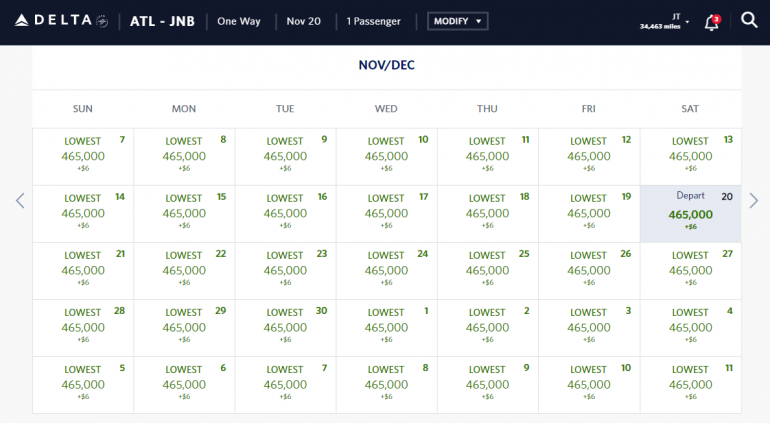 However, if the international flight you want is operated by a partner airline, the cost will reflect an unpublished table that shows the prices for your flight based on the region you are flying to and the cabin your seat is in, be rated. Delta has increased these unpublished affiliate award rates.

Where the prices for partner prices are currently

Delta works with several European airlines. SkyMiles allows you to fly between the US and Europe on Air France, KLM, Virgin Atlantic and more.

Before October 2020 award prices for flights to Europe cost just 25,000 SkyMiles each way in Economy or 75,000 SkyMiles in Business Class.

Now the partner awards start at 35,000 SkyMiles in Economy and a whopping 120,000 SkyMiles per route in Business Class:

In addition, Delta now charges additional fees for awards booked within 60 days of departure. You can see this increase by searching for a partner award flight and viewing the results in a calendar view, as shown for that flight from Las Vegas to London. This flight costs 35,000 SkyMiles when booked more than 60 days in advance. 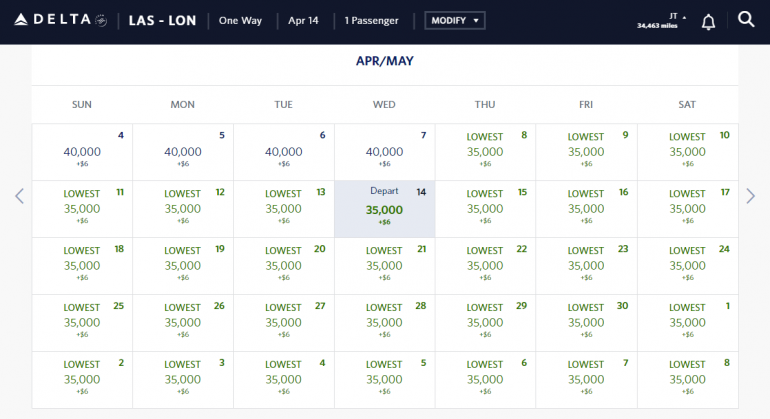 However, if you try to book the same flight 60 days before departure (or less) the costs will increase:

And within 21 days of departure, it gets worse: 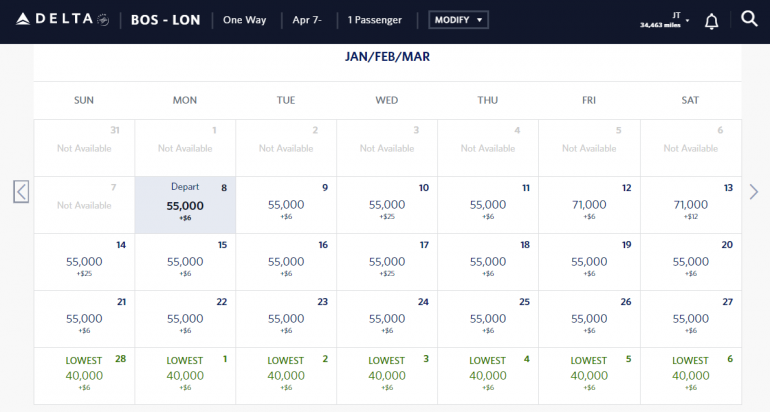 Based on these award searches, we have determined that the pricing for Delta Partner award flights to Europe is broken down as follows:

Delta has now increased the rates to: 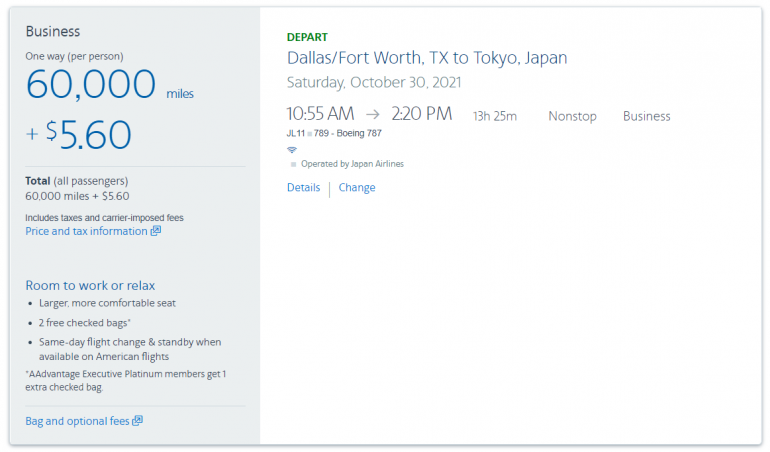 Between 22 and 59 days before departure, you must pay for: 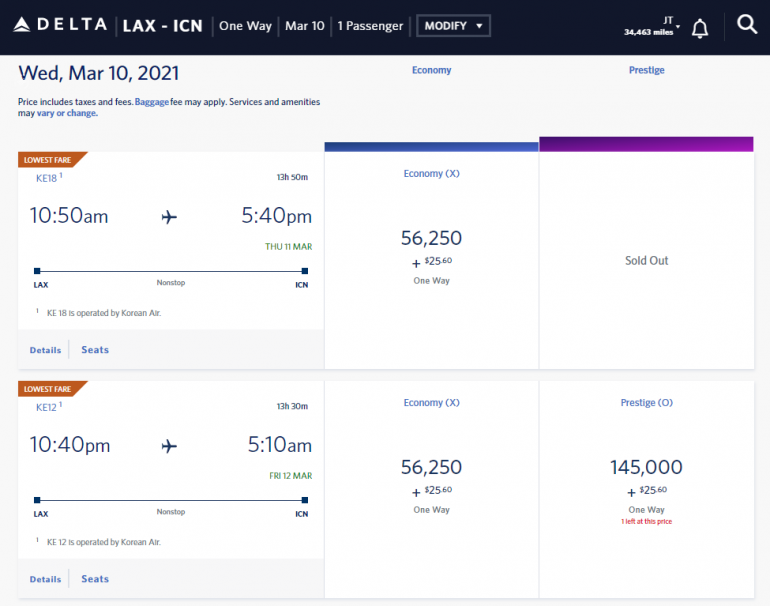 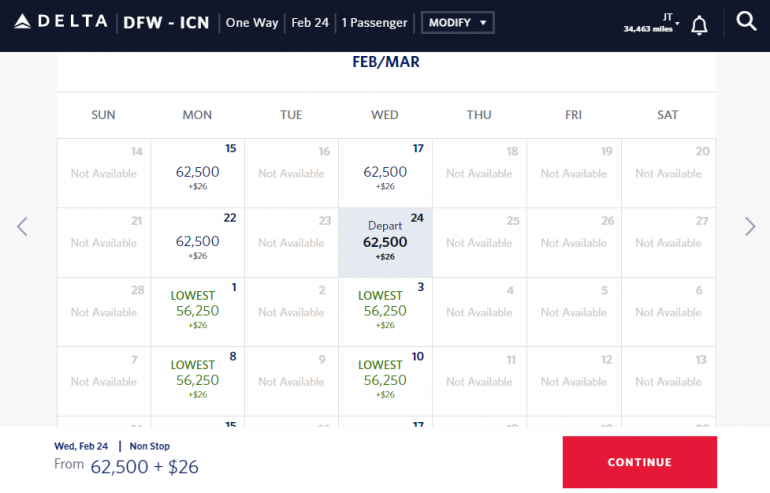 In the meantime, the award rates for partner business class companies increase to 160,000 SkyMiles within 21 days of departure.

We have compiled the following award prices for partner award flights between the United States and North Asia:

Those prices have soared in business to 67,500 one-way miles and a staggering 165,000 one-way SkyMiles in Business Class for flights booked more than 60 days prior to departure. This corresponds to a cost increase of over 90% for both economy and business class awards. 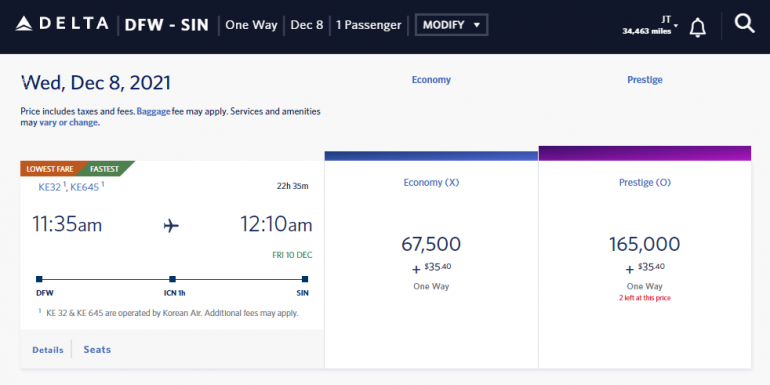 As with award flights to Europe and North Asia, Delta charges more miles for booking flights within 60 days of departure. You must pay within 60 days:

Within 21 days, the Partner Economy Awards will increase to 80,000 SkyMiles per route. Business class awards are likely to increase within 21 days too, but we cannot find any available awards at this time.

These searches indicate that Delta is currently charging the following award prices for partner award flights between the United States and Southeast Asia:

When you earn Delta SkyMiles, you now need more to fly partner airlines to Europe and Asia – meaning the miles you own are now worth less. As a result, it’s even harder to find a lot with your SkyMiles.

How to Maximize Your Rewards

How to Print Pay Stubs in QuickBooks Online

QuickBooks Online makes it easy to not only process your employees' payroll, but also to create pay slips that are compliant with your state's...
Read more
Finance